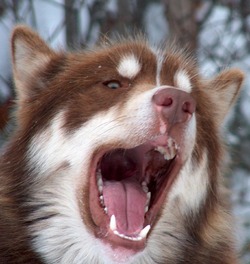 Winterwind currently does not have any puppies for sale on PupLookUp.

Some more information about Winterwind:

The Canadian Eskimo Dog is known to have been resident in the Arctic for at least 4000 years. The Canadian Eskimo Dog was first bred by the Thule people, while research has shown that it is related to the Greenland dog, with very little significant genetic differences. It is sometimes considered the same breed by authorities, although the Greenland dog can be criticized for lacking any proper breeding program, questioning its validity as a pure breed. It was, and still is (to a very limited extent), used by the Canadian Inuit as multi-purpose dogs, often put to work hunting seals and other Arctic game, and hauling supplies and people. Though popularly assumed to be a wolf-dog hybrid, genetic testing has shown that the Eskimo dog has no recent wolf anscestry.

In the 1800s and early 1900s this breed was in demand for polar expeditions. When snowmobiles came into use, the population numbers started rapidly declining, because snowmobiles are faster and need less care. In the 1920s there were approximately 20,000 dogs living in the Canadian Arctic, and the breed had been accepted for showing by both the AKC and CKC; however, in 1959 the AKC dropped the breed from its registry because of extremely low numbers. By 1963 there was supposedly only one dog registered with the CKC, and when this dog died there were still no others registered.

It probably would have gone extinct if not for the Eskimo Dog Research Foundation (EDRF). The EDRF was founded in 1972 by William Carpenter and John McGrath and was largely funded by the Canadian Government and the Northwest Territories, with some support from the CKC. The EDRF purchased dogs from the small (about 200 dogs) population remaining in the Canadian Arctic from remote Inuit camps on Baffin Island, Boothia Peninsula, and Melville Peninsula. The EDRF then began breeding dogs in order to increase numbers.

The Canadian Eskimo Dog is still very rare; only about 20 CkC reg’d breedable females, however they are making a come back to the show ring in Western Canada. Dedication to the preservation and future survival of the Canadian Eskimo dog promises its place in our future history and tradition. Through promotion and participation in the show ring we are hoping more people will be willing to undertake the responsibly and dedication of this indigenous canine and work with us and other CKC breeders to increase the genetic pool of registered stock. Those already involved are working diligently to increase numbers,ensuring genetic diversity and maintain the working integrityof the Canadian Eskimo dog.

Tho these dogs aren’t CKC reg’d, it is becoming more popular in Arctic tourism, with an increasing number of sled dog teams that entertain tourists. (Arctic outfitting company’s). According to them the dogs were taken care of, if you think being given four feet of chain, no doghouse to get out of the sun and to shelter him in the -50c winters and minimal if any food is taking care of a dog. We helped rescued some with help from recreational musher’s, one dog weighed 46 pounds and was so impacted with worms that he almost died… It took two nights on IV fluids to save him. He was due to fly to England with friends of ours but we were to learn while he was doing his 6 month quarantine with us that he had a problem seeing. So off we go to the Veterinary hospital for an eye exam, the doctors there saw no problems with his vision even though he ran into gates, doors and people like he was blind. The problam was optic nerve damage from either malnutrition or that he suffered a blow to the head. Needless to say we decided he was to live with us in his retirement rather than fly him half way across the world. He still has vision problems but he is now 75 pounds and is everything you expect of a Canadian Eskimo dog, Happy, playful, initiating play with people and other dogs and can still hold his own with the young boys in harness.