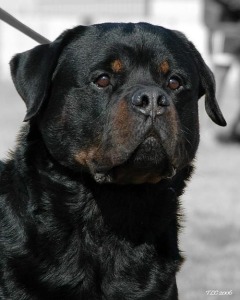 Von Warterr Rottweilers currently does not have any puppies for sale on PupLookUp.

Here at Von Warterr Rottweiler kennels we strive to produce the complete Rottweiler.

The goal of our Rottweiler breeding program is to create a show quality  Rottweiler who is sound in temperament, beautiful in type, healthy in genetics, correct in structure, strong in drives, intelligent in mind, proven in pedigree, imposing in appearance, substantial in bone, powerful in heads, dark eyes, dark mouth pigment and with well defined rich mahogany markings. We aim to achieve this ideal through carefully selected line breedings and occasional out crossings when we feel that it will improve the genetics. We breed exclusively from European bloodlines and primarily from German bloodlines and in that sense we are German Rottweiler breeders. We follow the 1996 Federal Cynologique International(FCI) standard which allows us to still dock our  puppies' tails. The FCI standard is the recognized standard throughout the world. In fact, the United States is the only major country that does not adhere to the FCI standard in its entirety. Our Rottweiler's pedigrees boast such world class names as Burgthann, Bleichstrasse, Bickesheim, Crni Lotos, Falconsnest, Gruntenblick, Jenecks, Lauterbrucke, Obergrombacher Schloss, Od Dragicevica, Schwaiger Wappen, Schwaiger Rathaus, Teufelsbrucke, Vom Calibra, Von Hasan Haus, Von Hause Neubrand, Von Hause Milsped, Von Der Scherau, Von Der Frankentanne, Von Der Crossener Ranch and others!

Our desire is to continue to improve the breed quality of the  Rottweiler here in the United States and it is our privilege to provide responsible homes with a well balanced Rottweiler puppy that is capable of both winning in the show ring and competing on the sports field in either Schutzhund, herding, carting, weight pulling, agility or therapy work. However, our highest priority is to develop loving and loyal dogs that can truly be described as "Man's Best Friend."