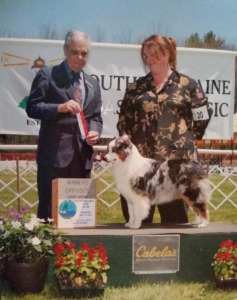 Schaefer's Mini American Shepherds currently does not have any puppies for sale on PupLookUp.

Schaefer's Aussies and now Miniature American Shepherds, I have Trained, Shown, and Trialed the dogs I have owned in AKC, Canada, UKC, ASCA, USRC(Rottweilers), successfully since 2001.

Before my dogs are considered for breeding, they have a minimum of hip and elbows passed by OFA and they have had their eyes CERF'd. However you will see several more health tests completed before the breeding ever takes place.

I only breed dogs that I feel are a good representative of the breed, which includes temperament/health/breed standard, regardless of how many titles I have put on them or health tests they have passed.

All puppies are raised following the Puppy Culture Program.  They whelped and raised in the house under foot (not in a kennel), so they have plenty of socialization, are started on housebreaking and crate training before leaving for their new home at 8 weeks.